In previous blog entries we highlighted the usefulness of viewing multiple years of data for the same variable. In short, analyzing the same variable across multiple years allows users to identify trends. For example, in one of the previous blogs we showcased the explosion of tablet ownership over recent years (quadrupling!).For this week’s blog, we’ll see if the data matches our own observations on the rapid decline of landline phones in households. Let’s get started!

First, open a Standard Report and navigate through this path: MRI Consumer Survey » Telephone to find the variable, % Households w/ a Telephone: Have a landline telephone, 2015.

Hover over the variable and select the Select Variable Year option from the Action Dropdown menu. You will see the years 2008-2015 on your screen. Select each year as shown below: 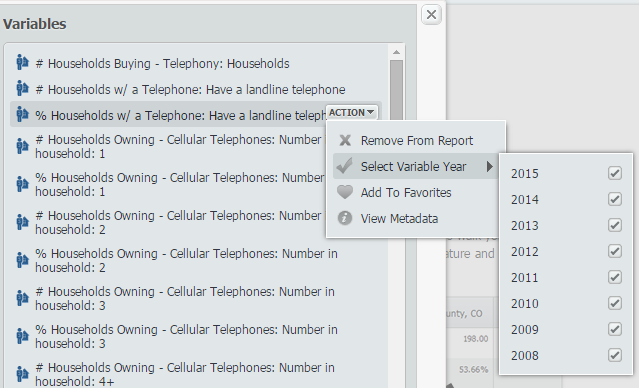 Close out the variables panel to generate your report for the United States. Here are the results: 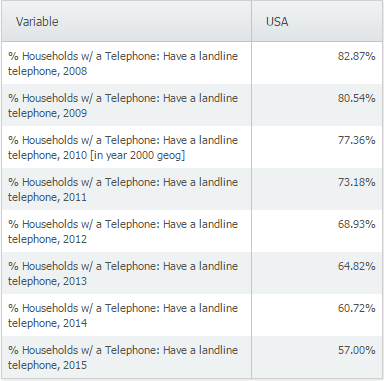 The percentage of households with a landline telephone has dropped significantly, from 82.87% in 2008 to 57% in 2015. We suspect this decrease is due in part to the rise in cell phones among other things, but we’ll leave that data to another blog.

Out of curiosity, we ran a Ranking Report to determine the top 5 counties in America with the highest % of households having a landline telephone:

We hope you enjoyed this week’s SimplyMap report – stay tuned for more!