Ranking the Highest Population Densities in the US

Can you guess which US city has the most residents per square mile? Today we’re going to use SimplyMap to answer this question for all cities, as well as cities with a population greater than 100,000. The variable we will be using is a Census Variable, Population Density (per sq. mile), 2014.

First, create a new Ranking Report, and set the geography to USA. Next, navigate through this path to select the variable mentioned above: Census Data » In 2010 Geographies » People and Households » Population » Total.

As a benchmark, the USA comes in with a density of 89 people per square mile.

To change how we analyze the variable by, utilize the Analyze Data By feature to analyze USA by States. Doing so yields the following: 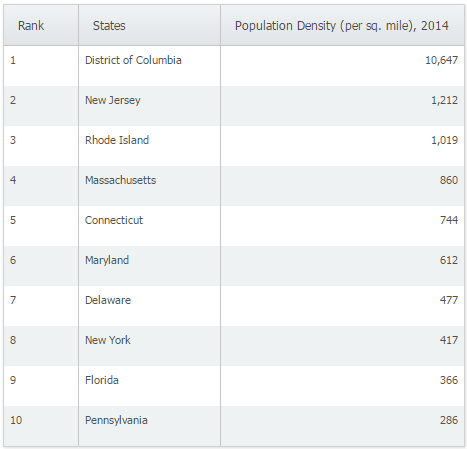 Not surprising, DC comes in first at a density of 10,647 with New Jersey coming in a far off 2nd place at 1,212. Next, we will analyze this variable by city. Unfiltered results yields the following top 10 cities: 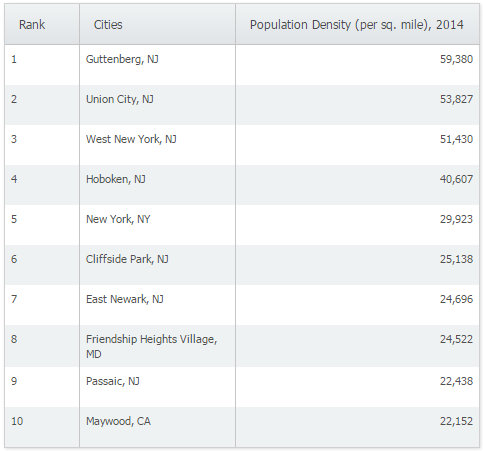 Guttenberg, NJ is the most densely populated incorporated place in the country with a staggering 59,380 people per square mile. A little research into Guttenberg, NJ reveals that the town itself is only 4 blocks wide, with a population of 11,176! It’s easy to see how Guttenberg would be ranked first overall in the United States.

Lastly, apply a population filter to only reveal cities with a population greater than 100,000. The results are shown below: 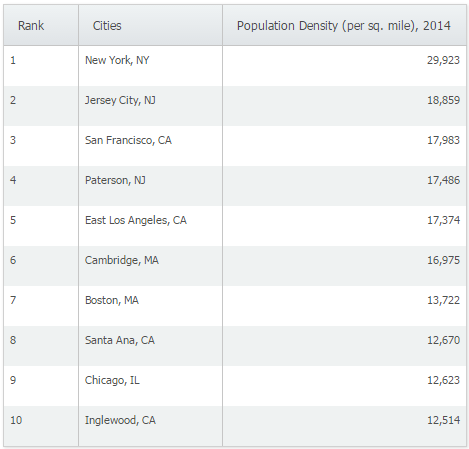 Are there any reports that you would personally like to see? Feel free to let us know in the comments below!

Have you already entered for your chance to win an iPad or Kindle Fire? We will be holding the drawing on April 17, 2015. To enter, simply follow us on Twitter and Like Us on Facebook to get your name in consideration.